So this is similar to a recipe I saw in cyberspace that stuffed chicken breasts with spinach and cream cheese which were then breaded and fried. I decided to use chicken thighs since they are far superior in my opinion. I also had some bacon to use up, so instead of breading and frying, I wrapped them in bacon and baked them.

First I sauteed some spinach in a little olive oil with a touch of salt and pepper and let that cool. I added a package of cream cheese, half a cup of Parmesan cheese and about a tablespoon each of garlic powder and onion powder and mixed that all together. (Darn dark pics). 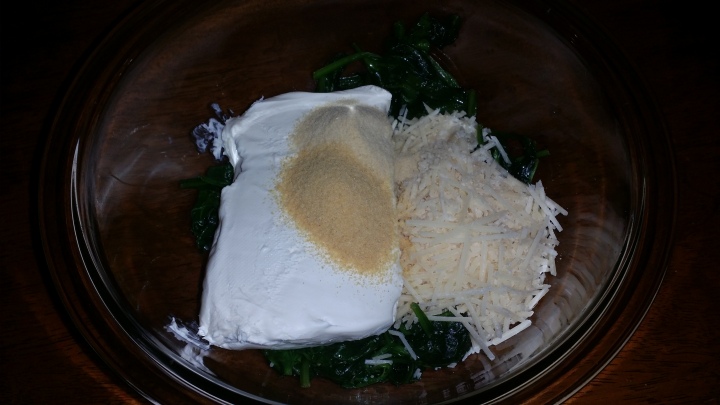 Next I trimmed a little fat off the chicken thighs and pounded them out evenly. I lightly dusted with rub on one side.

I then divided the filling between the chicken and rolled them up. Wrapped up in a strip or two of bacon and placed on a rack in my roasting pan.

They were baked at 350 degrees until the internal temperature was at 165 degrees. Sorry I did not get pics of the whole pan when done. Some of the filling did ooze out but I just scraped that up and ate it. 🙂 The thin bacon was done perfectly, the chicken had great flavor and was super juicy still and the filling was gooey and delicious! Thanks for checking in…now go make these! 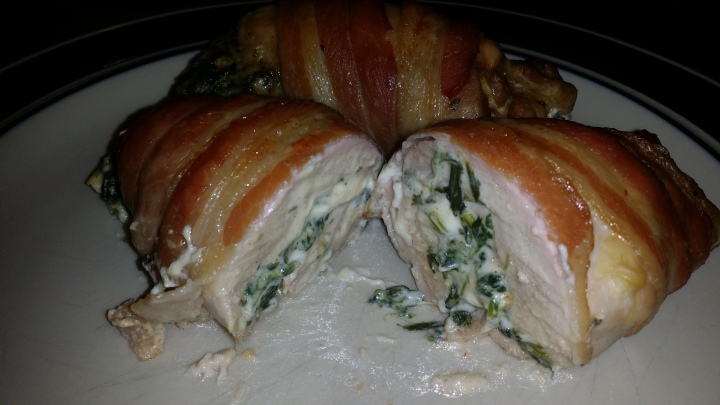