So I saw a fellow blogger is hosting The Pancake Party Challenge and decided to throw my hat in the ring. I decided mine had to have some MEAT (of course…DUH!) and decided to go with crispy bacon bits. I contemplated some good breakfast sausage which would work just as well but yeah….BACON. Maybe next time I will use both! I also thought about making waffles out of the batter and some fried chicken too, but alas it is a PANCAKE challenge. 🙂

I started off cutting up some bacon to render down and make crispy bits. I reserved the fat to use in the mix instead of butter and also to cook the pancakes in. While the bacon was chilling on a plate with paper towels in the freezer I mixed up the dry ingredients in one bowl and the wet ingredients in a slightly smaller bowl. I added the bacon to the dry ingredients then the wet stuff went in and I mixed it ever so lightly until just combined with plenty of lumps left. I almost forgot to take a pic of the batter so this is half gone but I wanted to show the consistency.

I got a frying pan heated over medium heat and added in some of the bacon fat. Now I only made four pretty good sized pancakes out of this much batter but you can make them any size you like. You could also double the recipe easily to make more. I was only able to eat one of the pancakes this size though. Depends on how hungry you are.

I only put a nice pat of butter on and drowned them in maple syrup. My son LOVED his with peanut butter and syrup after being apprehensive at first since I mixed the bacon right into the batter. They were delicious! Light, thick, rich and fluffy with plenty of bacon-y goodness. Hope you make some and enjoy as much as we did!

The recipe is my version of about 5 different recipes that I have used or seen over the years. Here is the recipe which is not normally something I really do, but for baking (I know it’s not technically “baking”) it seems to be important. 🙂

Mix wet and dry lightly…should still be lumpy.
Cook in bacon fat over medium heat until browned about 2-3 minutes per side. 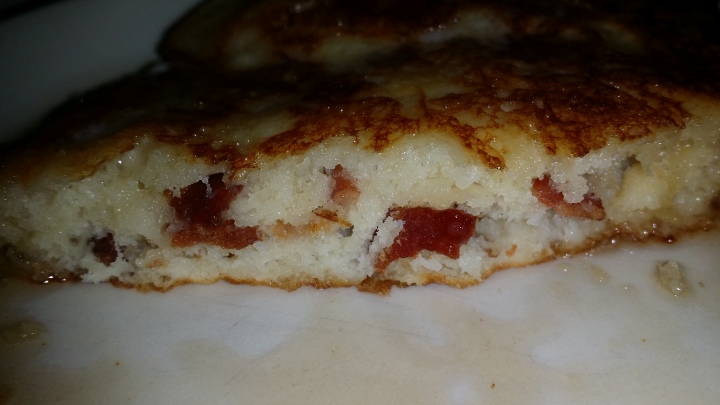