Bacon is something almost everyone loves. I use tons of bacon for my creations and I can’t seem to get enough. I have been wanting to try and make my own bacon for quite a while so it was time to get on it. I bought a hunk of pork belly that was about 4 1/4 lbs.

It had the skin on so the first step was to remove the skin. I started slowly at one corner and gently peeled the skin back cutting it away from the meat as I went. I was able to get it off in one piece! I am freezing the skin to make cracklins or chicharrones another day. After removing almost 3/4 lb of skin, I ended up with about 3 1/2 lbs of nice bacon makin’ belly. I was very pleased with the meat/fat ratio on this belly. It looks fantastic. 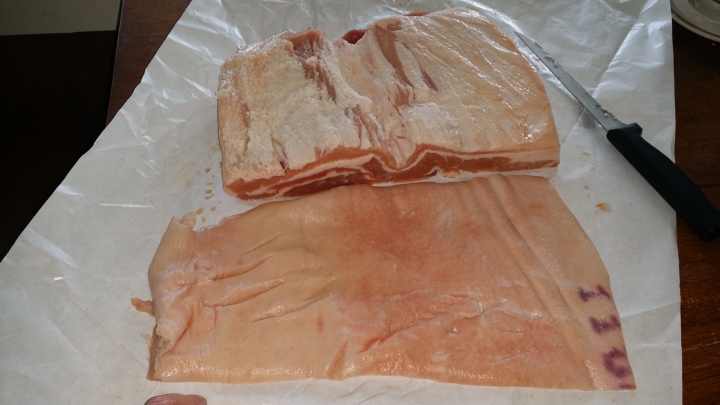 On to the cure. I wanted a sweet and spicy bacon (I love that combo). So after a little research on the amount of pink salt to use for this size pork belly. I came up with a recipe for my cure. I normally don’t do measurements but I wanted to be able to adjust next time so I am going to write it all down. Here is what I used. 2 t pink salt, 6 t salt, 6 t pepper, 1 t cayenne, 1 t onion powder, 1 t garlic powder, 1/4 c brown sugar, 3/4 c maple syrup and 1 c water. I boiled everything together except 1/2 c water until the salt and sugar were dissolved then added 1/2 cup’s worth of ice to cool it down. I placed the pork into a heavy zip lock back and poured in the cure. Got it all closed up, removing as much air as possible. 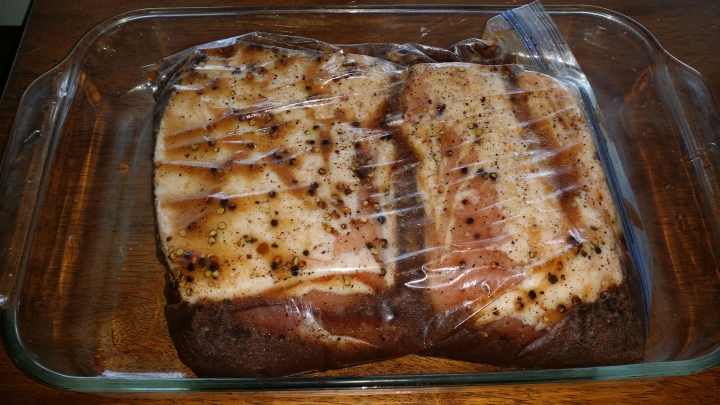 Into the fridge for at least a week, turning the bag over at least once a day. After 7 days I sliced a little bit off and fried it up to check the seasoning and saltiness. Tasty. I am going to call the cure good. I removed the pork from the bag and rinsed it off under cold, running water. I am going to let it air dry for a day so I placed it on a wire rack above another pan to catch any drips.

Once it has become nice and dry and tacky to the touch it needed a smoke bath. Now I don’t have the proper setup to do a cold smoke, so I am going to hot smoke it as low as I can. Onto the Weber it goes. I put a big pan of cold water underneath the belly which should help to keep the temps down some. I am using cherry wood chips here for the smoke. (Don’t mind the onion, I was smoking that for my lamb stew I was going to make later in the day).

I was able to keep the temps at just under 200° until my pork belly reached 140° internal temperature. 145° is considered safe for pork and after resting it will rise up to that or very close. I did slice off a little and ate it right after resting and I am still here with no ill effects. 🙂

Once it had rested for about 1/2 an hour at room temperature and then cooled down I wrapped it in plastic wrap to fully chill over night in the fridge. This is chilled and ready slice now.

I sliced it pretty thick as I like it that way. Seems that even when you buy “thick” sliced bacon it is never very thick. These were close to 1/4 inch slices…mostly. I need a better knife than my 10 inch chef’s knife for this but it worked.

I decided I was going to make an amazing BLT sandwich. I got that started by heating the oven to 250° and slow roasting some of my thick bacon slices. I turned them over about every ten minutes until they were at just the right color and doneness. While that was going, I started making my tater tot waffles which I was going to use instead of bread for this creation. Basically ya just defrost some frozen tater tots and plop them into your waffle iron and cook until crispy. I also melted some smoked pepper jack cheese on one of the waffles under the broiler. So to build this sandwich, I put a generous amount of mayo on the other waffle, added shredded iceberg lettuce, thick sliced Roma tomatoes, three layers of my delicious bacon and topped it off the cheesy waffle.

There is just too much awesome here on my plate. Best. BLT. Ever! I was actually happy how well it held together. The bacon is sweet, salty and not too spicy (I will fix that next time). It was so tender, delicious and perfectly caramelized. I will definitely be making more bacon in the near future. I know it sounds like a lot of work but in reality it did not require much actual hands-on time just a lot of waiting. Well, I hope you enjoyed this creation as much as I did. Thanks for stopping by!